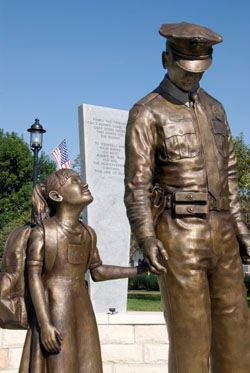 Police Memorial The Junction City / Geary County Law Enforcement Memorial is dedicated to all those who have protected the citizens of Junction City and Geary County throughout the years. The memorial also honors those who made the ultimate sacrifice and laid down their lives in the line of duty.

Circumstances
At 4:30 am on December 3, 2001, Officer Wilson C. A. Johnson, Jr, received a fatal gunshot wound while assisting a domestic battery victim to recover her two children who were being held in a Junction City apartment building. The domestic battery suspect shot Officer Johnson during a confrontation in the apartment. Officer Johnson died at the scene. After shooting Officer Johnson, the suspect attempted to leave the building but another Junction City police officer prevented his escape. The suspect retreated to the apartment where he took his own life. The two children, ages one and three, were unharmed. Officer Johnson served the Junction City Police Department for eighteen years as a patrolman and detective. He joined the department after a twenty-year Army career that included two tours of duty in Vietnam and tours of duty in Korea and Germany. He was a member of the Fraternal Order of Police, the Junction City Police Officers Association, and the Kansas Peace Officers Association. Officer Johnson was fifty-six years old at the time of his death. He is survived by his wife Hermine Linda Johnson and two stepsons, David and Michael Quintanar.

Circumstances
Assistant Marshall Cooper was attempting to quell a disturbance created by Fourteenth Cavalry soldiers from nearby Fort Riley. The disturbance became violent when Cooper was shot by cavalry trooper W B. Buchanan. The suspect later committed suicide in his cell. Cooper died two days after the November 18, 1901, incident.

Circumstances
Night Policeman White was nearby when Cooper was shot. He went to the area after hearing the gunshot and found Cooper on the ground. He started toward Buchanan. Buchanan then emptied his revolver into White. White died immediately.

Circumstances
City Marshal Daniel McCleery, because of continued disturbances by a group of Texans, ordered the "rum" and billiard room of a shop closed. When the Texans refused to follow the order, the Marshal called on Buchanan for assistance. Buchanan was shot and killed by James Coates and H. M. Childers. In 1872, Childers was found not guilty of actually shooting Buchanan and was freed. The local press said the acquittal was a "put up job," but the technicality of Chiders’ not being proven to have actually shot was the key point. Coates had not been located.

Our thanks to the Kansas State Historical Society for the above information. Please visit their Kansas Law Enforcement Officers Memorial page.